My printer prints on its own a prophecy

One Saturday night I was trying to print my Spanish sermon. The printer would not print. I cleared the print dialogue box, turned on and off the printer, still nothing. I prayed and then waited. A few seconds later the printer began to print. It printed in English, not Spanish. It printed nothing that was in the computer.

It was as if the printer was connected to heaven. It printed five words from the Lord:

Speak of what I’ve done

I origninally thought that the words referred to God’s miraculous healings. I now believed that they refer to what Jesus did for us on the Cross. We are all called to speak of what He has done, the Gospel.

The Angel of the Lord

In 2006 I had dream. In the dream a window to heaven opened and a large angel in blazing white appeared. He shouted: “SOULS, SOULS, SOULS”.  The angel was so powerful. I was really petrified. In the O.T. one angel destroyed an army of 185,000 soldiers.

In the morning I asked the Lord what the dream meant for me. He spoke to me in my heart: “The answer is in the envelope”. Recently I had received a Benny Hinn envelope. I opened it and read the words: “REMEMBER, He died for souls, souls, souls.”

Truly the cry of heaven is for the salvation of souls. May the Gospel be our heart cry also. We can spend so much time and effort seeking temporal things, and forget the eternal. The Father God is intensely interested in the condition of a soul. Other things like cars, houses, jobs, money will all pass away, but our soul is eternal. 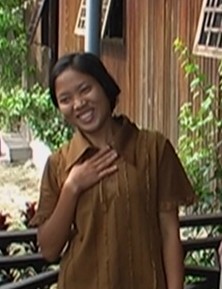 The power of God fell in a house meeting that was filled with the sick. I preached the Gospel. At the end of the meeting I shook hands with this young lady, in the photo, to say goodbye. As I did so the power of God came upon her. She collapsed to the floor trembling under the Holy Spirit. When she got up she said that she heard the angels singing. I asked her what they were singing about. She said they were rejoicing that souls were being saved.

“Or what woman, having ten silver coins, if she loses one coin, does not light a lamp, sweep the house, and search carefully until she finds it? And when she has found it, she calls her friends and neighbors together, saying, ‘Rejoice with me, for I have found the piece which I lost!’ Likewise, I say to you, there is joy in the presence of the angels of God over one sinner who repents.”                       (Luke 15:8-10)

God removes the smoke from an island

On my first trip to Indonesia we were supposed to visit the island of Kalimantan, inhabited by some 3,000,000 people. However due to burning off, the whole island was covered by smoke, so that the plane could not land at the airport. We had been delayed for some days. However the time was well spent and we went to a mountain retreat with students where God moved in a wonderful way.

A group of Christians on Kalimantan prayed all night that the smoke would disperse. My team went to the airport in Jakarta airport in faith, believing God to do a miracle. We were told all flights were cancelled as visibility was less than one metre. We prayed and then came the announcement that we would fly. However, we were told that it was likely the plane would return without landing. Well we did land. When we got off the plane there was no smoke, not even the smell of it, and incredibly there was no wind. God did an amazing miracle. Praise the Lord.